Статті
Steve Krug: «Writers tend to drink heavily, and I can understand why»
Interview with Steve Krug, the author of the book «Don't Make Me Think».
1 серпня, 2018 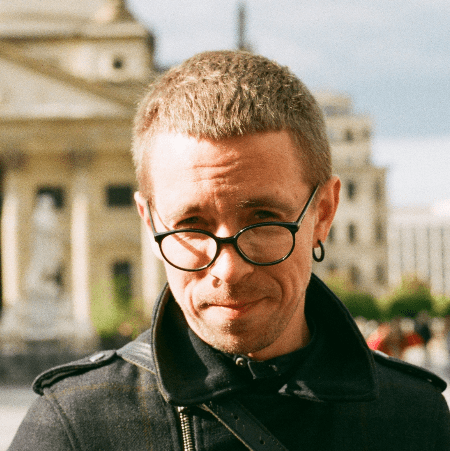 Steve Krug is a designer and author of the famous book «Don’t Make Me Think». He spent more than twenty years working as a usability consultant for Apple, Bloomberg.com, Lexus.com, NPR and many others.

Misha Rybachuk talked to Steve Krug about his unpublished new book, useful applications, enemies of the designer and unexpected places for inspiration. What are you working on now?

I’m working on the new book. It’s not exactly a book about usability or UX. It’s actually a book about writing, to make it easier for people to get writing done. I want to write about the things that I’ve learned from 30 years of writing. You probably know from my books that I don’t really like writing. I find it really hard work. But from doing it for 30 years I’ve learned some things that make it easier for me and, I think, can be useful for other people.

So I’ve been thinking for some years now that I want to do another really short book with things I wish people had told me 30 years ago, when I was starting to write. And surprisingly it turns out that a lot of what you have to do when you’re writing is the same as usability, the same as doing good design. A lot of it’s usability issues. Just like the interface in software, writing needs to be user-centered: It has to meet the user’s needs. And it has to be accessible to the reader. And the other thing it has to do is to not make me think unnecessarily. Sometimes you’re reading something and thinking “I’m having to put a lot of effort into figuring this out” as opposed to only putting the effort into absorbing what it’s telling me.

A lot of usability comes down to the thing I consider most important, which is clarity. Making it clear to the user is the top priority you want to meet. And it’s the same thing with writing. So that’s really what I’m working on.

I still teach on-house workshops when people ask me because I love teaching people how to do their own usability testing. Partly, because it’s fun for me, I like teaching. But also partly just because it works so well. I know they’re going to discover that it’s really valuable for them. So that’s what I’m working on now, and I’m looking forward to being done. As many writers say, I hate writing but I like having written.

You wrote the book about users’ behavior. How does it change with the new technologies? I’ve written in the introduction to the third edition of Don’t Make Me Think that I believe the same thing that Jacob Nilson says, which is that technology changes fast and people change slow. So the problems that usability has to deal with now are basically the same old problems of how people figure out how to use things and how people perceive things, and that doesn’t change very quickly. Even with new technology people are still going to make assumptions about how it works when they’re trying to figure it out. They going to miss important cues about how to use it. And they’ll still be moving very fast, so things that they need to know have to be pointed out and highlighted much more than you think so they don’t miss them. But at the same time I was thinking about what are the new technologies. I think augmented reality is probably more powerful than virtual reality. And that may sound silly, and I’m probably dead wrong. I said way back in the first edition that I’m terrible at guessing what’s going to happen. The only thing I know about what things in the future are going to be like is that the important changes are not going to be the things that we expect. They’re going to be surprises.

Voice interfaces is another one. I’ve always liked dictating instead of typing, so I’ve used speak recognition software for many years. And now I dictate text messages and email using Siri on my IPhone, because the keyboard is so small. I think the coming technologies still have the same requirements: they have to be clear to the user. With voice interfaces, the user has to understand what they can say at any given time, and they have to know how the thing is going to react. The other thing that’s still true of all of the new technologies is that the only way you’re going to get it right is to test it. People have been talking a lot about “How do we do testing for something like augmented reality?” And some of the issues are different, but basically you’re still just going to have to figure how to do user testing, because you’re not going to get it right the first time.

When you were writing your book, what was your main pain? The reason why I wrote the first book was that I was given an opportunity to do it just because of somebody I knew. The real reason why I did it was to increase my consulting rates. I had a nice practice, I always had clients and I always got new clients from old clients, so I was never short of work to do. But I didn’t have any public reputation – I didn’t give talks and I hadn’t written anything – so I didn’t have the nerve to raise my consulting rates. I figured if I had a book I could. So I spent a miserable year writing it, and I didn’t expect to make any money from sales of the book. But then it started selling, so that was wonderful.

So the main reason was just to get some new clients and that’s all? Or you wanted it to get people know your experience?

I thought I could explain what I do – what I did as a consultant – in a way that would be useful for other people. So that was great. But really the motivator was that I wanted some kind of reputation that I could use to raise my rates. (After it was all over, I found out that I could have raised my rates anyway, without a book.)

What apps have you recently used  that have a really great interface? And why do you think they are great?

I have a couple that I always think of when people ask what I like. The Uber app is really good. It does what you want it to do. It gives you the information you need. It simplifies and adds a degree of certainty to a process that used to be incredibly uncertain (finding a taxi). It uses the location information from your phone so the driver knows where to find you. But also it has a nice interface that lets you type in where you’re going and does a really good search of places, businesses, addresses, whatever, that you can then confirm on a map and say “Yes, that’s the place I want to go to” – it’s not just another place that has the same name. It tells you how long you’re going to have to wait, how much it’s going to cost, and where there are drivers cruising around near you.

Another one is the Hipmunk app. It’s a travel service that I use mostly looking for flights. You type where you want to go and when, the same as on any booking site. But instead of a long list of flights, it produces a timeline with a line for each flight, showing you visually what time of day it happens, how long it lasts, whether it has any stops, and how long the layover is. Like Uber, it gives you the information that you really need, and no information you don’t need. It’s probably my favorite design. Where do you get an inspiration? But please, don’t tell me “everywhere.”

I actually only have one place to tell you. The real answer is water. I always get my best ideas and solve problems in the shower. That’s it. If I’m writing and I’m really stuck on how to do some part of it, if I take a shower I’ll figure it out. Sometimes I think I should just take several showers a day, and be much more productive. So that’s it. That’s my inspiration.

What is your favorite interface that you worked on and why?

More than 30 years ago I was a tech-writer before starting to do usability. And I was working with some people on a startup who were doing one of the first Windows programs. It was sort of like a CAD program. But when you sketched something, you could apply dimensions and relationships (like “this side is twice as long as that side”) to the different parts of your sketch. And then you could change the values, and the whole sketch would redraw itself according to the changes you made. Then five years later when I’d been doing usability for a while, the same people asked me to help them with usability of a new product, so I worked with them for a while. They really appreciated the value of usability more than anybody I ever worked with. And the product they developed turned into a huge company that’s on the desktop of most engineers now.

And then about five years ago the same founders got back in touch with me and said that they wanted to do it all over again, only in the cloud. So you get a power of a huge computer, but it all runs on any low-powered laptop, and even mobile devices. Usability is one of their cope principles. And they do usability testing all the time, right from the very beginning. So that’s actually been my favorite, partly because it’s such a useful thing and partly because the people there are so great and really smart.

Who or what  is the main enemy of the modern designer?

I think it comes down to how hard it is to get distance from your own work: how hard it is to see how the things you’re building look to someone who doesn’t know what you know. The problem as designers is that we know too much. We know how the thing is supposed to work. We know what the ideas behind it are. We know what the words used in the interface mean. And it’s really impossible as a designer to not know all of that. You can’t un-know what you know. It’s very hard to get that kind of distance from it. So that’s why I love so much the idea of watching people who don’t know the thing try to use it. I think that’s the only way you can see the things that you’re too close to it to see. It always reveals things that are confusing to users that you never would have thought of, because they’re obvious to you. So, I think the biggest enemy is the fact that without outside help it’s impossible to get distance from our own stuff to see what the problems are. Fortunately, there’s a simple solution: usability testing.